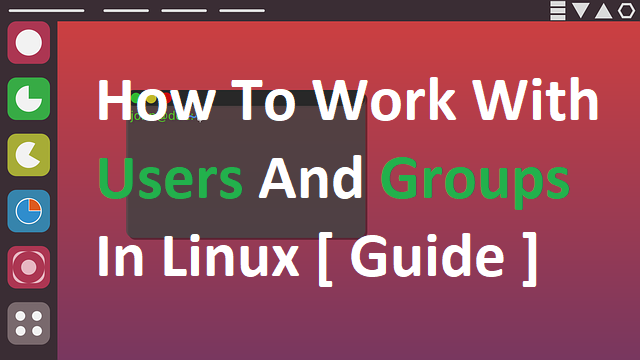 Introduction To Users And Groups In Linux

In this tutorial we will show you the basics for working with Linux Users And Groups, we will slightly upgrade with additional knowledge where necessary and more.

Why do we need to understand user accounts in Linux?
Linux is a multi-user platform, in which each user has different rights. Some can read, others can read and write, or have the right to see certain directories. Also, more than one user can be in the system at the same time.

What this article will cover?

Only root users or users with sudo privileges can add or remove users.

Adding a user in linux

To add a user we use the command adduser, here is the base syntax:

As you see in the basic syntax on the bottom there is a text “Add a normal user”. That means that we have other options like adding a user group or system group, adding a user to a group and more. If you type adduser –help you will see all of the options but for now we are going to create our first user. Lets say his name is John.

Now we have created our first user with the name John Wayne, working in room 13 with a work phone 0878555123 and home phone 0878555123, and we have a good description to know that we need to delete him after this tutorial.

Keep in mind that linux has multiple ways to add users. Like the binary command useradd. Here is the difference:

useradd is native binary compiled with the system. But, adduser is a perl script which uses useradd binary in back-end.

adduser is more user friendly and interactive than its back-end useradd. There’s no difference in features provided.

Creating a group and adding it to the user

When we create a user, he automatically gets his primary group for example John:John, this is his main group.
But we can also give John the right to work with other groups they are going to be his supplementary groups, so he can work along with other users. Now lets create a test group and add him to it.

If we want to add John as a sudo user we can do the following
$ sudo usermod -aG sudo john
Alternative method to adduser is usermod like for example:
$ sudo usermod –a –G new_group john

Ok, so now we have a new user John, he has his primary group john and his supplementary group “new_group”. But what other groups does John have? We can check that with our next command “groups”.

Okey but now we have decided to remove John from new_group so we do the following:

But lets not stop there, John has been a bad boy and we want to disable him from entering our system:

After a little thinking we have decided that we want to delete John forever so lets do it!

Now John is no more 🙂

But seriously, in Linux, working with users and groups is not complicated, there is a wide range of commands, and in this tutorial we tried to show you each one in a way that we think is memorable. In addition, we offer you a short video in which you can see how the commands work.

We hope you enjoyed this article on Users And Groups if that is so please rate this page with the stars bellow and subscribe to our YouTube channel.